This week's game comes from the July Panera Thursday night tournament in Colorado Springs.  It was a rather unusual night of chess this time.  Typically, I play in a secluded room using the tables and chairs.

However, this night my opponent was Anthea Carson NN, who doesn't  like the fact that all the air conditioning is pumped through this room.  She suggested that we play outside of the ice chamber and among the diners in the restaurant.  I am not too picky about my surroundings for a chess game so I was agreeable.

The nice thing about the ice chamber was that it had a lot of square tables.  The square tables are slightly larger than a tournament board.  So, it takes two square tables next to each other to be comfortable with a clock, scoresheet, and water.

The dining area did not have any square tables next to each other.

The next choice is a round table which is a little disconcerting for a chess player who is used to thinking in squares.  Plus the extra surface area of a square within a circle means that you are farther away from the 8th rank and having to cover this extra distance throughout an entire chess game can tax a chess player's physical stamina beyond his normal limits.

So, I opted to go with Janice Kondracki's suggestion of playing in a booth. I have never played chess in a booth before, unless you count the chess booth at the Renaissance Festival, which is really just a table with stumps.

A restaurant booth has a different dynamic.  The dim lighting and cozy surroundings are foreign to a chess player.  Add in a female across the table from you with food and drinks and it is less like a tournament chess game and more like a date.

Of course, that just makes things more uncomfortable as we are both married, and my wife was watching the game.  So, I tried to focus on the game and not the surroundings. Here Anthea NN over thinks the postition and just drops a knight, which makes for an easy game, but hard to figure out what to do now that Anthea NN lost interest in this game and had gone off to write her hubs.  Since I had my cell phone camera with me, I thought I would express my creative side with some snap shots.

Here is my favorite: 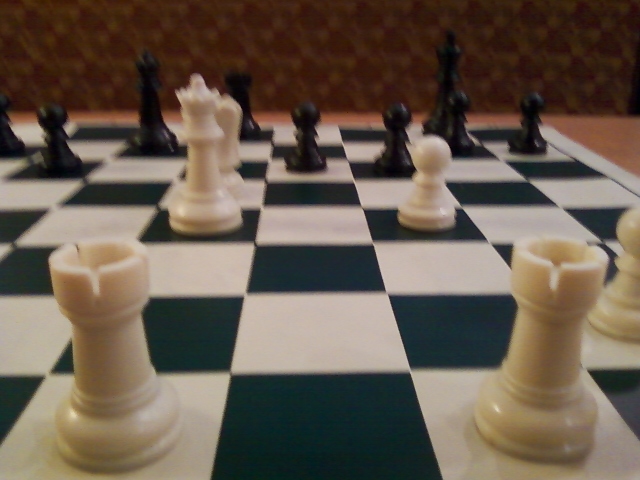 The funny thing was that Anthea's NN's choice of playing in the dinning area was rather fortuitous, as all 16 chess players were kicked out of the community room by 3 ladies who had reserved the space for their book club 6 months ago.

I took shots of all the chess players on the tiny square tables and the oversized round tables, but they didn't turn out too well.  The other interesting picture was my scoresheet from the exact postition above.  We are about six moves from the resignation. 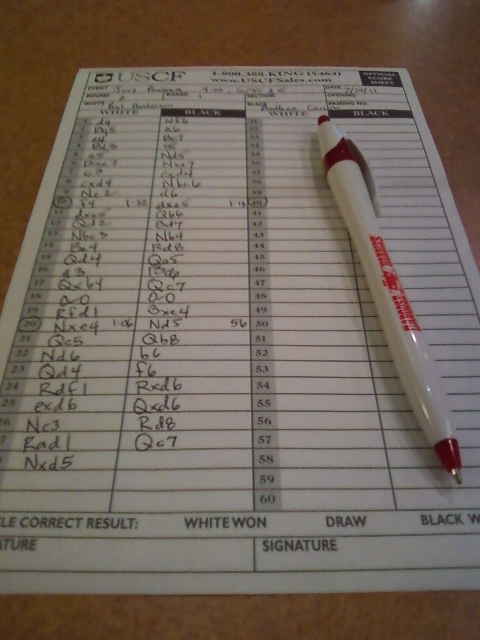 On July 12th, the CSCC had 5 members in attendance.  The participants braved the rain and parade to play speed games, but no score was kept.