This week's game comes from the CSCC Resurrection Online.   Due to the Coronavirus, the Colorado Springs Chess Club has been closed for a month.  We have been unable to meet together on Tuesday nights for over-the-board chess.  So, we decided to check out the online tournament capabilities.

Running a tournament online sounded easy enough.  However, nothing ever goes as planned.

I resurrected one of my accounts where I had founded the online version of the Colorado Springs Chess Club on Apr 10, 2013.  It was mainly for advertising the physical club and was as useful as the toilet paper aisle at King Soopers.  However, eleven members had joined the inactive group.

Since the site offered Live Club Tournaments, I created an event days in advance and sent out the link in the newsletter.  Of course, the link died, and I had to scramble to create a new one an hour before the start time.

Many players couldn't find the event, and I was bombarded with text messages five minutes before my first game began.  I thought having the site be the TD would remove all the distractions you get running events at the club, but nothing ever goes as planned.

I was testing out how well my tiny laptop would handle the very complicated website.  It did not do well.  Bear in mind, it runs on Windows 7.

In game one, I was still trying to answer all my texts and make my moves.  Suddenly, a red square appeared on my board.  I thought that was strange but was not sure what that meant.  After Rhett Langseth captured two pieces in a row, I realized I had accidentally made a pre-move.  I lost the game.

In game two, I tried to play slower and not make any random clicks.  Of course, the laptop died, and I had to scramble to get on another computer before I was flagged.  Fortunately, the site kicked my son out of the tournament before it started and his gaming computer was free.  I won my last 3 games on his better equipment and better connection.  Ah, the joys of online chess!

In the final round, I played Mark McGough.  I am legally required to play Mark in every tournament I join.  So, I knew our pairing was coming.  He was trying to play on a tablet in his family room.  His screen would display my time but his was cut off.  He tried to view other games while his game was playing which would create tiny little boards on top of his game and the X to remove those boards was also cut off his display.

Is it any wonder our game was such a mess?

Mark thought the website should provide an analysis feature to go over the games.  I told him, "They do.  Yours was probably cut off your display."

So, I picked our game as the Game Of The Week to share some of the analysis features his puny tablet couldn't view:

That was a real battle - but you earned the win! 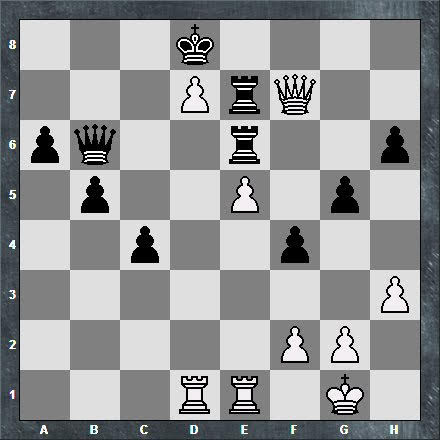 On April 12th, the Colorado Springs Chess Club held its first online tournament!  It was a 4 round, Swiss System tournament with a time control of G/15+10.  Dean Clow saved the event by posting the new link where players could find it (just so he could win it).  Thanks to everyone for testing it out!