Game Of The Year XVI

Start Of The Season

The times are changing.  Historically, I put out my Game Of The Year at the end of my chess publishing season some time in August.  For 2019, I did not get it done.  I have been spending the off-season looking for some excuse why I did not publishing the 16th version of the Game Of The Year.

Then Coronavirus hit!  The Colorado Springs Chess Club was closed; businesses went dark; the streets became desolate, and toilet paper can only be purchased on the dark web.  Now, I had the perfect justification for my lack of chess writing.

However, the more I thought about it; the more I realized how essential chess is to the victory over this dreaded plague.  Clearly, chess is the greatest tool for social distancing since the invention of body odor.

I have been social distancing ever since I downloaded a chess app to my phone.  I convinced myself that moving from sleeping in bed to playing chess on the couch meant I was up and being productive since, technically, I am a chess professional and any practice counts as work.  In addition, my favorite aspect of chess club is the fact that I can escape any boring social interaction with three simple words, "My opponent moved."

Unfortunately, the stay-at-home order has been extended.  Not enough people are practicing safe space.  Well, I have decided to do my part.  My plan is to resurrect the Colorado Springs Chess Club and convert more people into social distancing masters by offering online tournaments for the club.

The Game Of The Year comes from a Quick-rated game given to me by LM Gunnar Andersen.  He won the 2020 Colorado Springs City Speed Chess Championship in January and became the 11th champion.  Unfortunately, the speed games are not recorded.  So, I picked the next best thing.

However, I also wanted to tell you about my best victory from last year.  It came from my encounter with the auto insurance company Progressive.  If you are just interested in the chess, then feel free to skip over my rant.

Filing an insurance claim can be like a chess game.  You will need a lot of patience; it helps to look at all the legal moves you have and be familiar with the tactics your opponent will employ.  After all, your opponent will use all the time allowed and still not resign no matter how bad their position is.

When I was finally finished with my ordeal with Progressive, I thought I should share my experience with others.  I had spent a lot of time researching how I could beat them and wanted to record some of the things I learned just in case someone may need advice in the future.  However, coming up with a title for the blog was difficult.  I wasn't sure how much emotion to convey.

Finally, I just decided to make it my Game Of The Year.  After all, it was my best win of 2019 and a better payday than any chess tournament I have won.

Before I get into the details, here are the main lessons I learned:

"The accident was simple," I thought.  Someone backed into my parked car on November 9, 2018.  I was not even in the vehicle at the time.  He apologized and gave me his insurance information.

I had a similar accident 10 years earlier.  I made one call to State Farm.  They said, "We are sorry, pick a repair place, and we can help with the rental."  I never had to speak to them again, and my car was restored to its previous glory.

With Progressive, the tactics started on the first call.  They will push you to use their repair place and get you in before they have to mail out the state required notice that you have a legal right to choose your own repair company in Colorado.

Then the lies will come.

The repair place I chose said, "We can submit the estimate.  Who is the insurance company?"  When I told them it was Progressive, they groaned.  But they had worked with Progressive before and emailed the company and myself the estimate within one day.  But, I heard nothing.

When I called, Progressive said, "We never got the estimate."  Now, I realized this was going to be a fight and got off the phone.  I figured it would be better to have a record of what they were saying if I needed to prove it in court.  So, I resent the estimate to them.  I had to sent it close to six times before they acknowledged it.  By this time I had filed a complaint with the Department of Insurance.

The Department of Insurance doesn't really do anything.  However, the insurance company can face a fine if they do not respond to the complaint within a certain period of time, and it does get other people involved with your case.

Finally, after months of stalling, they made an offer based on the original estimate.  They offered $1,451.63 after I emailed them that I was going to take this to small claims court.  Their low-ball offer was about $1,000 lower than the estimate.  They even lied (in writing this time) saying, "I have issued payment for the damage."  The check never arrived, and I would not have accepted it anyway.  I felt I had enough ammo for court.

It took 4 months of calls and emails for nothing.  When I threatened to sue, I got an offer.  After I filed the case, they were willing to settle.

One of the concerns I had was how to get Progressive and not the insured.  But you have to sue the insured in small claims court, and the insurance company will provide an attorney and pay the judgement.  I kept the insured informed about how I was being treated and the suit.  He was not happy, but he was willing to call Progressive and push them to settle.

I had one more chance to remove Progressive out of the loop and get my money when Judge Mathis contacted us.  I was willing to drop the small claims case and get a free trip to Chicago to be on TV, but, unfortunately, the defendant has to agree. 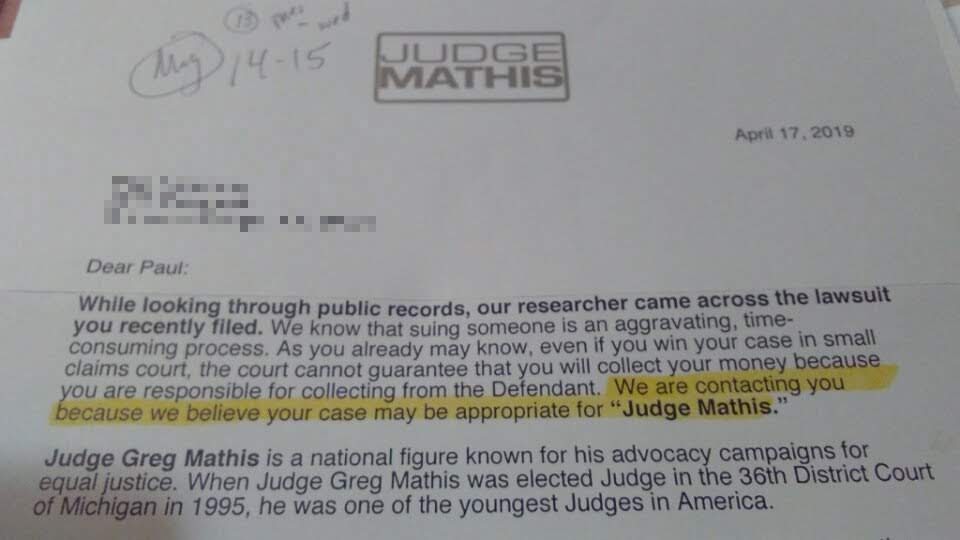 My preparation for trial was to watch A Few Good Men and Pawn Stars.  You can have representation in small claims if the defendant has an attorney, but I couldn't find an attorney willing to take my case pro bono.  So, I was just going to use what I learned about negotiation from Pawn Stars to settle before the trial.

I had filed the case for $6,890.01 by throwing in lost wages, interest, and punitive damages.  The limit for small claims cases in Colorado is $7,500.  I figured that would scare them and give me plenty of room to negotiate.  I don't think it worked.  Progressive has probably been sued a lot and knows what they are likely to lose.

The Progressive attorney contacted me the day before the trial with a revised offer.  It wasn't much higher.  So, we went to court.  The judge gives you one more chance to settle before starting trial.  I decided $3,000 was my bottom line, but Progressive wouldn't go any higher than $2,200.  I was still so mad at them that it was worth the risk to have the judge decide.

The verdict was $2,914.57.  I was pretty close and may have been right on the money except that I only got 2 estimates for the damage and the judge used the low, Progressive estimate as the third to make an average.

While things went well for me, I realized going to court is a risk.  The court can be backed up and have a back-log of cases.  Sometimes the wheels of justice grind slow.  The judges can pretty much do whatever they want.  Sometimes you get a just judge, sometimes not.

And now, back to an actual chess game.

LM Gunnar Andersen got the Game Of The Year thanks to good timing and an old policy I created to punish one of my chess villains.  I am the Dark Knight of Colorado Springs chess.  When the bat-signal shines bright on Tuesday night, I must swoop in and prevent any crime.

Years ago, the Penguin tormented the citizens of Colorado Springs.  I banished him to Arkham asylum and offered any citizen the right to have their victory over Penguin moved to the top of the publish list.  The citizens rejoiced with the return of safety and sportsmanship.

However, the peace was short-lived when the Riddler tried to wreak havoc.   The ingenious use of the bat-camera scared the Riddler into hiding.  Tranquility returned to the club until the Joker's cackling laughter sent shivers up the spines of everyone in the tournament hall.  Again, the Dark Knight was able to restore order.

One at a time, the villains were little match for the Caped Crusader.  Unfortunately, there has been a jailbreak and the inmates have escaped:  the Penguin, the Riddler, and the Joker are on the loose!

With LM Gunnar Andersen's new Speed crown and his ability to win chess games at lightning speed,  I chose one of his quick wins as the Game Of The Year.  I call it:

The Flash vs The Penguin 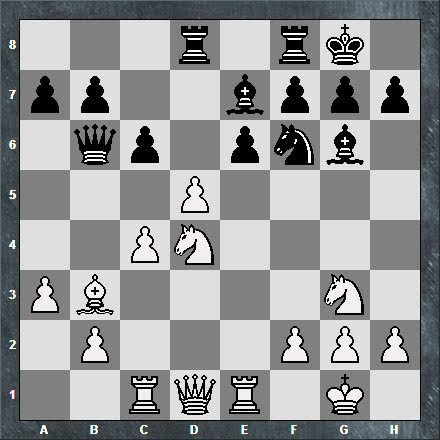 Game Of The Year XVI

The Last Week In Chess