Josh Bloomer won the 2017 New Mexico Open Chess Championship and was thus declared the New Mexico Chess Champion.  He took clear first place with 5.5 out of 6 and raised his rating to an impressive 2326.  His one draw was against Jesse Vicario of Las Cruces in the first round.  In clear second place with 5 was Brian Wall.  Brian lost the fourth round encounter with Josh, but won all his other games.

The outcome was a little unusual since both Josh and Brian live in Colorado.   States that decide their state championship in an open tournament usually specify that while the high scorer is the winner of the tournament, the state champion is the highest scoring player who resides in the state.  That was not done in this case, so Josh was rightfully declared the New Mexico State Chess Champion for 2017.

I had hoped to get a game played by Josh from the 2107 New Mexico Open, but apparently the score sheets were lost along with the NMCO computer that disappeared.  I thought I could get a game by contacting Josh, but an attempt through Facebook got no response.  So, I checked online and found the game below played between Josh Bloomer (White) and Brian Wall (Black) at the 2017 Fall Classic in Denver a month before they finished first and second in the New Mexico Open.  It is curious that the results of the Fall Classic mirrored the results of the New Mexico Open.  Here too Josh finished first giving up only a first round draw and Brian finished second losing only to Josh in round 4.

The game is fascinating!   The opening quickly goes out of book, typical for Brian, but the position looks normal, when Brian hands to Josh a common sacrifice that seems to force a win.  Brian manages to survive the initial onslaught, but when the dust settles Josh is a pawn up with a dominating center and Brian's king is still exposed - seemingly a clear win if Josh simply presses the attack in the center.

But then the game takes another unusual turn.  With all the major pieces on the board and bishops of opposite color and given the nature of the position, conventional wisdom would be that Josh should avoid exchanging major pieces and press home his attack.  The last thing he should do is trade off into a bishops of opposite color endgame where his extra pawn likely would not be enough to win.  And yet Josh deliberately heads for the bishop endgame!

I cannot say that the resulting endgame was a theoretical draw, but it is certainly difficult to find any winning plan other than waiting for Black to make a mistake.  On the other hand, if that was Josh's plan, it worked.  After a lot of maneuvering around, Brian finally makes the mistake that allows Josh's king to get into his position.

This move amazes me. Any experienced player would know that you cannot play Nd7 in a position like this. It invites Josh's sacrifice on the next move because it blocks Black's queen bishop, thus making the e6 square weak. I have no doubt that an experienced master like Brian is aware of this, but he does it anyway. Brian has a reputation for playing unusual, provocative moves in the opening, but this is a bit much. 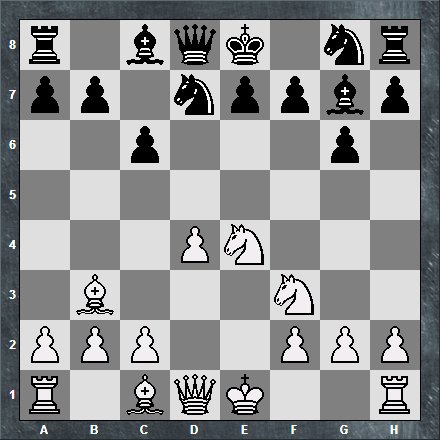 The reason 7... Nd7 was so bad is it blocked Black's queen bishop, thus making this move possible.

Oops! The knight is trapped! Perhaps Brian was correct in playing this line after all.

Moving the bishop away from the exposed king does not look good. The king needs all the help he can get.

[Better is 17... Bg6 but even then White has an extra pawn, safer king and better pawn structure]

White has an extra pawn, a dominating center well supported by his pieces and Black's king is still exposed.  The one problem White has is the bishops of opposite color, which makes a win difficult if the major pieces come off the board.  Consequently conventional wisdom would say that White should avoid exchanging major pieces and try to win in the middle game.

As with Brian's 7th move, this amazes me.  Unlike Brian's move, I can't say this is a mistake, but Josh clearly doesn't believe in conventional wisdom.  The following sequence makes it clear that Josh not only doesn't fear the bishops of opposite color endgame, he actually is playing for a win by trading off to a bishops of opposite color endgame!

There may have been a good reason for this.  The time control was G90+30 and he may have already been short of time.  Josh may have been thinking that trying to win with the major pieces on the board was just too risky.  He may have judged that a substantial risk of a draw in the bishops of opposite endgame was better than a small risk of a loss in the middle game.

He continues the plan of trading the major pieces.

The last pair of rooks comes off the board.

So here we are in the bishops of opposite color endgame Josh aimed for.  He still has an extra pawn and a strong center, but there is no clear winning plan.  The problem is that Black's bishop dominates the light squares.  Even if White manages to create a passed pawn, White's king and bishop will easily blockade it.  The next phase of the game sees Josh jockeying for position, but with no detectable plan other than waiting for Brian to make a mistake.

Black is worried about the two pawns on the same color square as White's bishop, but advancing the pawns when his king and bishop have limited scope has its own risks.

[39... Kf7 is better. White's bishop is only a threat to Black's kingside pawns while it is e5. But with Black's king on f7, that is not a threat anyway. Nor can White's king attack with the bishop on e5 because the king is tied down to defending the e-pawn]

White hopes he can win both of Black's kingside pawns by giving up the g-pawn.  But it isn't there.

[If White wants to win he should avoid trading off pawns, which only makes the defense easier. After 40. Bf6 g4 Black's bishop is perpetually tied to the defense of the h-pawn and the squares f4, e5 and g5 have been opened to an invasion by White's king]

A clever move!  He sets up a position where White will not be able to win both pawns without giving up his e-pawn.

The g-pawn is secure!   If Whites takes it with his king, he will lose his e-pawn.  If he moves the e-pawn forward, then Black's bishop can defend both of his weak pawns from f5.  But on the other hand, with the pawn no longer on g5 the path is now open for White's king to invade via f4.  This is why the whole idea of playing h5 was dubious.

With Black's king stuck on d7 and his bishop stuck on g6 and h7, White now embarks on a plan of simply advancing his queenside pawns.  He hopes to either find a way to break through or set up a better position for going after Black's g-pawn.

The only way to play for a win.

Now Black has to defend against two serious threats - the advance of the passed g-pawn and an invasion of White's king to attack the b-pawn.  This plus the need to defend the e-pawn will stretch Black's king and bishop to the limit.

White's king will now be able to get at Black's queenside pawns.

As soon as he has it, White lets the win slip away again.

Black is two pawns down, all his pawns are weak and White still has that pesky passed g-pawn.  In spite of the bishops of opposite colors, White wins.

This Missed Week In Chess