This week's game comes from the Colorado Springs Chess Club's June Swiss 90 (4SS, G/90+30) event.  This tournament is a month-long event with one game per week.  I like the one-game-per-week format because it is easier to direct and play.  Not easy, just easier, but I prefer playing.  I do not prefer being the tournament director (TD).

Being a TD is a thankless job.  There is no fame.  There is no fortune.  It is just work, but I do want to keep the club going.  I feel like the Godfather.

"Just when I thought I was out, they pull me back in."

I can get most of the directing duties done at the beginning of the night and eventually focus on playing chess.  Well, at least, that is my hope.

Since this was the first Tuesday in June, it was round one.  I am always hopeful that my round one pairing will be an easy game because the first week of a tournament is more hectic as the TD.  It was not.

I was playing Grayson Harris again.  We met in the 4th round of the May Swiss 90, where he got behind in the opening, fought hard, and couldn't quite come back.  This time, it was my turn to fall behind and see if I could come back.  I used up a lot of time trying to figure out a plan to get my Pawn back.

Just when I thought I was won, Grayson pulled out Qa5.

Now, I was low on time and fighting to hold the draw.  When I reached this position, I wasn't thinking tactically and missed the killer move.  However, I held the draw as long as I could, and, with a minute left, I took a shot.

Just when I thought I was drawn, I pulled out a win. 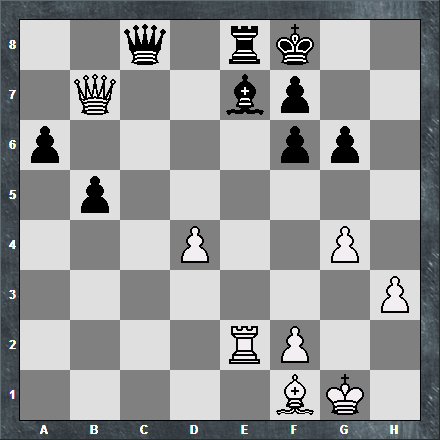