O Is For Overload VIII

A couple years back, I came up with a method to organize chess tactics.   I called it the DROP Method (https://cschess.webs.com/apps/blog/categories/show/1378181-drop-method).  The DROP method is an acronym for the basic kinds of tactics.   It is meant to remind you not to drop your pieces and help you get your opponent to drop theirs.

The Overload is played when the player creates a threat on a target that cannot be defended.   The classic example is choosing a target and piling more attackers on it than supports the defender can muster.   When the number of attackers are greater than the number of supports, material can be won through a series of captures.   Each capture creates a new target until the final support is exhausted and an unguarded target appears.

However, the Overload is, perhaps, the most broad kind of tactic.   Not only does it use multiple attackers on one target, but also it uses a single attacker on multiple targets.  The idea is the same:  to gain a target than cannot be defended.  So, most players will become familiar with the different types of Overload:

Here is a position from the Colorado Springs Chess Club's May Swiss 90 tournament.  Robert Kohler played in the Springs until 2004 and recently returned to take on his number 2 foe, Dean Brown.  Dean went after a Pawn (31. RxP), only to leave himself open to the classic Overload tactic. 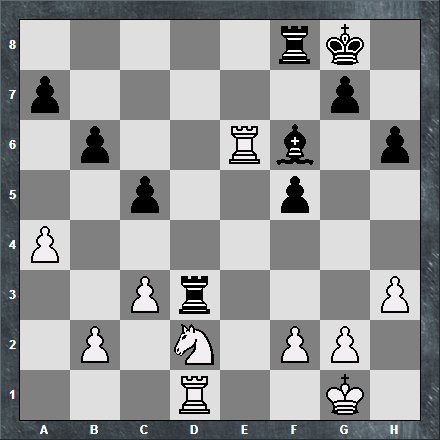 O Is For Overload VIII