Game Of The Year XV

Well, another chess season has come to a close for me.  It is time for me to move on to managing the website for my other hobby (https://spamfootball.webs.com/), but I will return after the football season ends.  Before I go, I wanted to clean up some loose ends.

Of course, you can still send in news items or articles during the off-season, and I will email them along to the subscribers.  Any games I receive will be stored at the Colorado Springs Chess News’ Yahoo! group (https://groups.yahoo.com/neo/groups/cs_chess/info).  You can also join the group to keep receiving chess games all year round.

Usually at this time, I look over the past year's statistics to see if it was a good or bad year for me.  Looking over the statistics helps me get past the bad feelings that linger from my losses.  They bring me back into balance and force me to look at what I did right and what I did wrong.  While the past couple of years have been off and 2018 isn't looking much better, I still have time to improve 2018.   Here is how it is going so far:

So, what happened in 2015 when my rating started to tumble back down from my peak?

I started directing tournaments for the Colorado Springs Chess Club in 2015.  It is not easy to direct and play well.  I still haven't figured out how to find the balance between focusing on my game and taking care of the event duties.

However, directing hasn't been all bad.

Directing tournaments for the Colorado Springs Chess Club is a nice way to give back to the club I have enjoyed for 20 years.  My largest pay day for chess was while I was a tournament director.  I get a lot of material for my newsletter.  And every once in a while, I get to see a game that just makes my year.

Larry Osborn provided me with the most enjoyable game of the year.  Since I play and direct, I didn't get any time to watch his game.  However, my Vice President, Peter Barlay saw the ending and told me, "You are going to love this!"  I went over the score sheet at IHOB, as I was uploading the ratings report to USCF at 2:00 am in the morning.

It was the chess equivalent of a hail mary pass.  Instead of the "Minnesota Miracle," it was the Colorado Springs Miracle!

I go over hundreds of games each year just hoping to find a game like this so that I can send LM Brian Wall a legitimate contender for the Jim Burden Award rather than my crappy, blitz blunders (https://cschess.webs.com/apps/blog/show/4007078-for-such-a-time-as-this).

Here is my nomination for the 2018 Jim Burden Award. 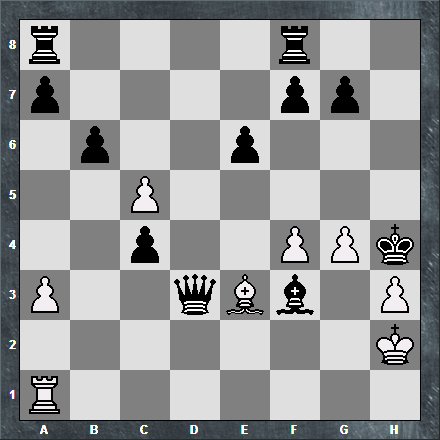 Game Of The Year XV