You probably think the title is a reference to theoretical chess versus practical chess.  Actually, I mean the theoretical physicist, Albert Einstein, developer of the theories of special and general relativity, versus the more practical physicist, Robert Oppenheimer, who was the scientist who directed the development of the atomic bomb with the Manhattan Project in Los Alamos, New Mexico.

There is a chess game they played against each other in 1933 at Princeton University where Einstein had taken a position after leaving Germany.  It is known that Einstein played chess.  In fact, he was friends with Emanuel Lasker.

It is not known for sure whether or not Oppenheimer had an interest in chess.   The following is one of only two games known played by Einstein, and it is the only game known played by Oppenheimer.  There is some question as to the authenticity of this game.  Some claim that White was actually Hans Einstein, Albert's son, and the location was the University of California, Berkeley, where he and Oppenheimer were both professors in the late 1940's.   Others claim that Black was really Max Oppenheimer, the artist.

On the other hand, nobody has proved that the game was not played by Albert Einstein against Robert Oppenheimer.  So, here it is - the theoretical physicist versus the practical physicist.

Einstein is definitely following theory. 4... b5 This is not bad, but it is a bit unusual. Perhaps Oppenheimer is taking a practical approach by avoiding theory?

This definitely takes the game out of theoretical lines. Taking the pawn with Black's king uncastled and White ready to play Re1 is risky.

A novelty and Einstein's only bad move of the game.

Oppenheimer is so worried about what Einstein is up to with a4, that he misses his one chance of the game.

Oppenheimer begins his slide into oblivion.

It is tempting to stop mate and at the same time counter attack against White's knight, but this is very bad because it exposes Black's king on the h5-e8 diagonal. 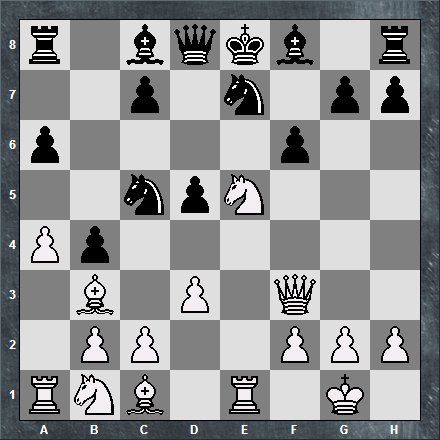 Evidently Oppenheimer thought this would refute Einstein's attack because now he is threatening two of Einstein's pieces. But he overlooked that the knight on e7 and the h-pawn are both pinned.

There is no way to save the bishop.