THE HISTORICAL ORIGINS OF CHESS IN ANCIENT INDIA

A few years ago I wrote an article about the origins of chess. It started as just an idea for a hubpage article which didn’t mean much to me at the time but I thought, since they paid by the view for clicks on their advertisements, I needed material to write about.

What started out as a casual topic for content became a fascination for me that led to me hacking my way through half the Mahabharata, the edited, translated version of course.

The original was in Sanskrit, and has been described as the longest poem ever written. The shadowy origins can be traced all the way back to between 800 and 900 BC, and the current text that my edited, translated version originates from was probably written in the 4th century AD during the Gupta Empire in India. Mahabharata could be translated as “The great tale of the Bharata Dynasty,” according to Wikipedia. However this title doesn’t quite for me capture the mysticism of the original, literal translation of the two words, Maha Bharata. Maha (The Great) Bharata (Successor of King Bharat).

In short, it is the story of two brothers. The older, by birth, was the legitimate heir to the throne, but he was blind. In those times, and in that culture, blindness symbolized wickedness and so the people would not accept him as king. The younger brother was made king. After the younger brother died, the different sons of the two brothers disputed the legitimacy of the other to be king. It was a valuable piece of land they each desired to rule, the Kurukshetra, a fertile plain between two rivers. Thus started the Kurukshetra Wars, also called The Mahabharata. And it becomes much more than a war between two cousins. It was now a war between two families, the Kurus, and the Pandavas.

Contained in the Mahabharata is the Bhagavad Gita, basically a conversation between the Pandava prince Arjuna and his charioteer, Krishna, who also happens to be an incarnation of a Hindu god.

At one point in their deeply spiritual dialogue Arjuna is shooting arrows from his chariot (which is the historical precedent for our modern rook), and he asks Krishna to take him up close so he can shoot his enemies better. 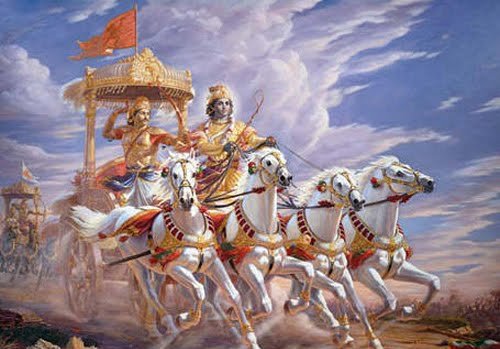 Krishna does so, after which Arjuna cries in essence, “Why did you do that? Why did you make me see that the people I’m killing are my own family. Now how am I supposed to kill them now.”

A similar feeling occurs for me when I can’t hate my chess opponent. It’s much easier to kill over the board when I can work up some hate. This is not an irrelevant side note of chess or war. It is a spiritual truth and conundrum contained within the Bhagavad Gita.

What, you might ask, does all this have to do with the history of chess?

Well, you see, I got so bogged down in this question myself that I failed to ever find the answer. I got so fascinated that I decided that if I had nine lives, I’d spend one of them pursuing this question even if it meant going to live in India in the region of Kurukshetra itself, to find some answers.

If you’re like me, and you too are deeply intrigued by the idea that the ancient game of chess originates somewhere around the time of the origins of this epic battle between cousins over the rulership of a fertile area of land between two rivers, then I say stay away from the topic altogether, if you value playing the game of chess.

You will find yourself so lost in the complexities of the details and tales within tales inside the Mahabharata that it will take hours and hours of valuable study time away from the game you love.

Of course many of the pieces moved differently in the ancient game. And it would take centuries for some brilliant mind to come up with the idea of using a checkered board instead of an undifferentiated white grid.

And of course most likely none of the games from these times were recorded, and had they been, they wouldn’t be analyzable by Fritz today, since the rules have changed many times since then.

The earliest game recorded, according to my limited research, is shown here: If it seems like 19… Bxf4 was a ridiculous blunder, keep in mind that in the early days of European chess it was considered rude not to accept a sacrifice. Many things about the game have changed over the centuries.

This game, the first recorded game that we know of, stands in place of literally thousands of years of possible games that went before it, including the metaphorical game that might possibly represent the battle in the Bhagavad Gita. A battle that lasted only 18 days. A battle over who should be king. It really puts the whole game into a new perspective for me. It truly is the game of kings.

THE HISTORICAL ORIGINS OF CHESS IN ANCIENT INDIA