I played in the chess club match this past Saturday. I haven’t played in a team event since my college days. In college, I played football and tennis.

Football is very different as a team sport when compared to tennis and chess. Football requires many players with different skills and assignments to work together at the same time to defeat the opponent in one game.

Tennis and chess are much more similar in the team aspect. Players with the same skills (although at different levels) and assignments work independently to defeat their own opponent in several different games and those results are combined to determine which team wins.

Therefore, this weekend was more reminiscent of my tennis experience. I played a couple of years on the University of Colorado, Colorado Springs team back in the ‘90s. I wasn’t very good and usually played 6th singles or 3rd doubles, which equates to the lowest board on a chess team. However, every now and then some of the stronger players wouldn’t show up and I would be moved up. I played 3rd singles once against the University of Southern Colorado.  When I played up, it was a bad omen for the team as it meant that the lower spots were often empty. I lost 3-6, 0-6 and the team was crushed.

For the chess team, I was scheduled to play 2nd board with NM Josh Bloomer on the top board. With me in the second spot, one had to wonder about our team’s chances.

However, Ft. Collins could only get an expert, Markus Petters, for their top board and we were higher rated on every other board as well. We felt good with our chances. I guess we didn’t realized how competitive club-chess matches were going to get.

The night before the match NM Josh Bloomer came down with a mysterious pain in his side and went to the emergency room. It was another bad omen for my team sports experience, as I was moved up to board one.

Later, Renae Delaware had discovered some unusual items in Randy Reynolds chess bag: a pin cousin, a large stickpin, and a doll that looked a lot like a heavier and shorter Wally Cleaver.

Now the ratings were almost even, and Ft. Collins out-rated us on several boards. Things looked even bleaker when Bill Whinemiller lost his first game on board 2. I had never beaten Markus and was playing an opening I had never encountered before.

My tennis team experience reminded me that when the top players lose, it is often a blowout. I definitely felt the pressure of board one and blundered away my first game giving the FCCC their second win.

On March 20, the CSCC held a simultaneous chess exhibition by NM Josh Bloomer. Josh won all his games.

In addition, on March 24, a team from the CSCC traveled to Denver to meet a team from the FCCC (Ft Collins Chess Club) for the Mountain States Chess Club Championship Match. Each team fielded 8 boards that were arranged base on USCF rating.

A member from one team played in a 2 round match (G90) against a member who was on the same board from the opposing team. The FCCC started hot with 2 wins on the top two boards, but they could only manage a couple of draws on the lower six boards and fell behind 3-5 at the break.

The good news was that the FCCC was only two points behind. The bad news was that the second round was yet to come. The CSCC turned the tide on the top boards this round with 3 wins, and they held off any losses with three draws on the bottom five boards and pulled away 11.5-4.5 to claim the Mountain States Chess Club Match Champions trophy. 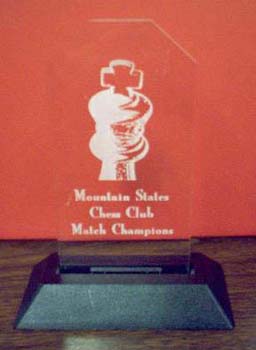 Here are some games I played over the weekend. The one where I took out Buck was pretty cool :-) Since it was actually played in Colorado Springs, it might be more relevant :-) The game where the 1500 totally violated me was a good one too. He played a cool move to get a open line against my king, then I proceeded to play horrible defense. So I beat an expert, then lost to a C player :-) D'oh!!

Congratulations to all of you!!! I am so PROUD of each of you!! THANK YOU for the success you gave the Colorado Springs Chess Club Team! You guys kicked butt Saturday! Congrats to you Paul for the biggest upset of the tournament! I know it's a big spot to fill on board 1, but you didn't let us down! (Thanks for publishing the games on the yahoo group also!) Bill, I didn't get to see your games, but great job holding Andy off the 2nd round! Josh, you played some awesome chess! Way to recover your round 1 game! Joe, great job beating up on Randy! Dean, you had some pretty interesting games! Good job keeping Lee reigned in! Mike, thanks for giving Cory some lessons for the road! Tom, you had a couple of crazy games, but you hung in there! That's the Mullikin spirit! Jerry, didn't anyone tell you it's not nice to pick on little kids?? :-) Way to go! Special thanks to Mike for filling in at the VERY last minute! If Josh Bloomer had played, our team average would have been 132 points higher than Ft. Collins. Because of the player change, our average was only a 20 POINT difference! Which is ALL THE MORE IMPRESSIVE with the final score CS 11.5 / FC 4.5!!! Hopefully you guys are as proud of the Colorado Springs team as I am! I look forward to our next Championship match! Goodies are on me tomorrow night at chess club! See you then! And again, thank you all for being there and showing what Colorado Springs is made of! :-)

The Colorado Springs Chess Club meets Tuesday evenings in the cafeteria of the Acacia Apartments Building at 104 E. Platte, just north of Acacia Park. The playing site opens about 6:30 PM. Most activities begin registration about 7:00, with play starting at 8:00. On most evenings, club ladder games are also available, including USCF-rated G/90 games. For more information call Buck at 685-1984 or e-mail [email protected] .Until such time as the work is finished in the cafeteria, players should arrive no later than 8:00 to get into the building. Please note: In addition to Tuesday evenings, club members are gathering for chess at these times:Wednesdays: Poor Richard’s, 320 N Tejon, 6:30 - 10 PM - Rated tourney, G/90, 1 game a nightThursdays: Food Court, Citadel Mall, 6-9 PM. Casual play, publicize chess.Saturdays: 3rd Sat. of month (4/21, 5/19. 6/16), Agia Sophia coffee house, 2902 W Colorado, 8:00 PM