“A broom is drearily sweeping up the broken pieces of yesterday's life. Somewhere a queen is weeping, somewhere a king has no wife, and the wind, it cries Mary.”

I wanted to get started on a new year of newsletters, but I found myself thinking about the passing of Kendel B. Crose as I remember playing him and I just read about it today. I wanted to pass along my sympathies to any of his friends and family who read this and share our only game together.

By Matthew Anderson and Paul Anderson

One of the nice things about my family living in Colorado Springs is that we are only an hour away from Denver. It is just a short, scenic drive along the front range to the big city, and with my son’s grandmother living in Highlands Ranch, the trip is reminiscent of that holiday song that goes over the river and through the woods.

Of course, in our case, it is more like over the divide (Monument) and through the forest (Black) to grandmother’s office we go. You see, grandma works for the gas company downtown, and they keep her chained to her desk, even on the weekends.

It works well for us as we always know where she is and parking is free on Sundays. Plus, the stuff we like to do in Denver is usually downtown, and Sunday, October 28, 2007 was no different. I had decided to take the family to Life Master (LM) Brian Wall’s simul and book signing at the Tattered Cover Book Store on the 16th Street Mall.

I was feeling an urge for some quality bonding-time with my son. I didn’t want to raise a boy who ends up in lifelong therapy because of his absent father. He has just moved into the teen years, and time seems to be flying by faster than ever. I wanted to create something he could look back on (and find another reason for his therapy).

Also, my father took me to a simul against GM Arthur Bisguier when I was a boy (http://cschess.webs.com/apps/blog/show/2929891-cicl-simultaneous), and it is one of my fond chess memories. In addition, I must have had recently heard the song “Cat’s In The Cradle” because I had the lyrics ringing in my head:

“My son turned [fourteen] just the other day.

And he walked away, but his smile never dimmed,

My plans couldn’t have worked out better. It was a wonderful time for the whole family! We grew closer together than we have ever been, and it is all thanks to LM Brian Wall and Anthea Carson’s book, “How To Play Chess Like An Animal.” It was such a perfect day that I just had to share our experience with other chess-playing fathers and sons.

Perhaps they could benefit from my ingenious planning and improve their relationships too. Perhaps, I would even be nominated for chess father of the year. The only way I thought I could improve on our day was to retell the tale together as father and son. Maybe that is asking for too much, maybe that is trying to improve on perfection, maybe I should quit while I am ahead, but what could possibly go wrong with a father and son reliving a fabulous day:

Father: “I am writing a chess article about the day you played the Lion Master (LM) Brian Wall. Would you like to help?”

Father: “Well, let’s give it a shot. I remember it was a beautiful, fall day. The Rockies were playing down the street that night in their first World Series, and the 16th Street Mall was buzzing with hope. Grandma dropped us off right in front of the big, brick bookstore filled with eager chess players waiting for the arrival of the master in his lion costume and his accomplice the gorilla. What do you remember?”

Father: “Well, maybe you could tell me a bit about your game. Since the gorilla only knew one opening from Brian and Anthea’s book, everyone got to face the Orangutan (page 23). How did you decide what to play against it?”

Father: “Well, maybe you could share something about your evening having dinner with the master afterwards at the Cheesecake factory where he shared his secrets with us about locating song lyrics on the internet and losing 70 lbs. Can you at least do that?

Father: “ALL RIGHT! THAT DOES IT! I AM SICK OF THIS ATTITUDE! I DON’T KNOW WHAT AGE SATAN WAS WHEN HE REBELLED AGAINST GOD’S AUTHORITY, BUT I’M GUESSING IT WAS FOURTEEN! NOW, GO TO YOUR ROOM AND DON’T COME OUT UNTIL YOU HAVE TOLD EVERYONE THIS LOVELY STORY! YOU GOT THAT! I MEAN IT! I’M GOING TO WATCH FOOTBALL! Where are my tacos?”

Son: “Hilarious, where did you get that joke? Ok, here is my story:

As my family and I walked up the stairs to the simul, I still was trying to decide if I was going to play. First, I decided not to play, but my mom said, “I'll play if you do.” So I changed my mind.

And little did I know that I would do better than I expected. Then the simul started.

The Orangutan (I thought he looked like a gorilla) came out and played the Orangutan opening. Brian (the Lion) Wall took over after the first 2 moves.

I hadn't played Chess for a while so I came up with some ideas then I asked my dad for his opinion (who was playing right next to me). Once he took a pass and went to the bathroom. Then I thought I made the best move of the game, which allowed me to fork white’s rook and king. After a few more moves, the Lion resigned as he held out his paw, and I, the Lion Tamer, shook his paw.” 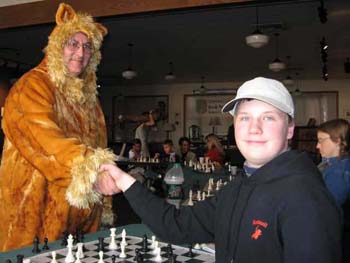 Last year, I nominated several people for an award to recognize and thank those people who had contributed to the Game Of The Week column.

This year I am going to continue that prize: The Academy Award of Contribution. This award (also known as the Roger) is intended to acknowledge that contributor who achieved an outstanding contribution in the field of chess-related web publishing contributions.

To be eligible for the Roger, a nominee had to contribute or had a TD submit at least one game that was published as the Game Of The Week during the 2007 season. However, this year, I will announce the winner a week after the nominees so that the nominees will have time to schmooze the judge and campaign for this prestigious award. The nominees are:

Thanks for your help and good luck!

On February 12th, the CSCC had 12 members in attendance. Most of the group played in the first half of the USCF-rated Cabin Fever Reliever (4SS, G30). Since this event last 2 weeks, there is still time to join in for the conclusion. Here are the current standings:

Photos Of The Lion Tamer

If you missed the photos of the Lion Tamer, you can view them here (4 photos):